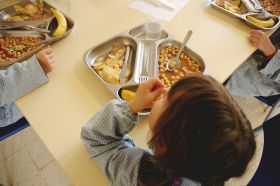 Sodexa is aiming to reduce the environmental impact of school meals

Plant-based foods must account for at least two thirds of each meal, while meat and fish must have relevant sustainable certification. Fruit and vegetables must also be sourced according to seasonality, no salt is added to the finished meal and all meals are served to standardised portion sizes.

The pilot is being rolled out in eight of Sodexo’s eight independent school contracts and is part of the company’s LiveWell partnership with WWF, which aims to encourage businesses and policymakers to facilitate healthy and sustainable diets.

For example, the Green & Lean lasagne contains more carrots, onions and celery than Sodexo’s original recipe and less beef mince, as well as using wholemeal rather than white flour pasta.

Nick Hughes at WWF said: “The food we eat – growing, producing and consuming it – has a massive impact on the planet. We have found that food is responsible for around 30 per cent of Europe’s greenhouse gas emissions.

“Through LiveWell we aim to provide simple, workable guidance on choosing a diet that can improve your health and that of the planet at the same time and is also affordable. It is great that these principles can be applied to meals like lasagne and chicken pie and we are hopeful that Green & Lean will be successful.”

A student at Brentwood School in Essex, which is taking part in the trial, said: “So far I have tried the beef lasagne and the chicken biryani. They were both really delicious and I didn’t notice that there were more vegetables than usual. We have learnt a lot in school about threats to the environment and about climate change, but I don’t think any of us realised that what you eat can affect this too.”

Schools will trial each of the 10 sustainable meals twice during this half term, and will receive promotional materials that explain the ethos of Green & Lean to students and staff.

Sodexo’s executive development chef for Independent Schools, Tom Allen, said; “It was really important that the meals we created tasted great. The idea was to make small changes to popular, well-loved dishes that would up the nutritional content and reduce the environmental impact, without dramatically changing the taste or the look of the dish.”

Following the pilot, Sodexo said it wants to market the Green & Lean meals to other schools and universities, and to its corporate customers, which include employee restaurants at leading companies.

Sodexo's corporate responsibility manager Edwina Hughes said; “At Sodexo we serve around one million meals every day in schools, hospitals, workplaces, sports stadia, army barracks and prisons. In short we reach consumers in every walk of life. For this reason we have an important role to play in both helping promote healthy lifestyles and in doing so in a way, which is sustainable.

“Green & Lean is an exciting development for us. We’re finding that consumers are more and more interested in the provenance of their food and want to make ethical, sustainable and healthy choices, but of course these options still need to be tasty and appealing.”