The deal to buy its discount rival, which has sold fresh-cut packs of fruit, has eaten into Poundland's profit margin 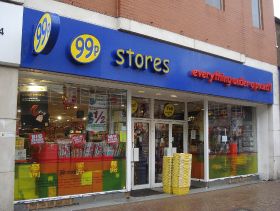 Amid a possible takeover bid from the South African conglomerate Steinhoff, UK discount retailer Poundland has reported that its pre-tax profit has crashed by nearly 84 per cent to £5.9m in the year to 27 March 2016.

Poundland blamed the long regulatory process for the declining performance of 99p Stores - which had been looking to boost its fresh produce range - before the acquisition. The competition regulator approved the deal in September after a six-month investigation, but during that time, 99p Stores lost its credit insurance, which meant it was cut off by many suppliers.

To stem losses at the new shops, Poundland rushed through a store refurbishment programme in four months, converting 235 new stores to Poundland by the end of April. The conversion programme is now complete, though, with a further 17 shops are to be closed or sold.

Steinhoff has amassed a 23 per cent stake in Poundland and is considering a possible offer. It is on the prowl again after failing to buy Home Retail Group, the owner of Argos, and French electrical goods group Darty in the last few months.