Brands pay to label emojis their own 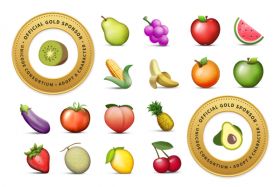 Fresh produce marketers have spotted a new chance to raise awareness of their products after it was revealed that companies can pay to become official sponsors of individual emoji icons, the pictorial characters used by millions of mobile smartphone users worldwide as a shorthand for adding colour and expression to their written communications.

Two groups have already seized the opportunity – Zespri Kiwifruit is now the official gold sponsor of kiwifruit emoji, while Avocados from Mexico has secured the same package for the avocado icon – but several of the existing produce-related characters remain available.

Both the kiwifruit and avocado are new emojis that were released by the Unicode Consortium, a non-profit organisation that manages the development of universal standards including the emoji system, on Tuesday.

The cost of a gold sponsorship is US$5,000, but according to Unicode this guarantees a permanent sponsorship.

All sponsors are acknowledged in an official online registry and receive a custom digital  badge for their chosen character.