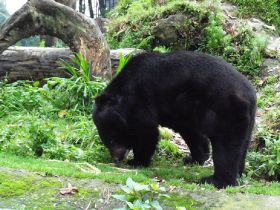 A Thai mushroom picker narrowly survived a frenzied attack by a drunken bear that jumped him from a tree.

According to The Times, 27-year-old Samporn Panta was foraging near Wat Phu Plansung temple in the north-east of the country when an enormous bear fell on him. Panta, who managed to escape, was bitten so hard that one of the bear's teeth was left in his body.

Experts said the animal became crazed after eating flowers from the tropical mahua tree, which are used to make alcohol for human consumption but are also capable of intoxicating animals. Analysis of the tooth suggested it was an Asian black bear.

Three years ago, eight villagers in eastern India were killed by bears on a mahua binge, The Times reported.

“The victim was in a part of a park that is off-limits to visitors because it is home to dangerous animals,” Teerayuth Wongpaisert, head of the national park, was quoted as saying. “He shouldn’t have been there.”