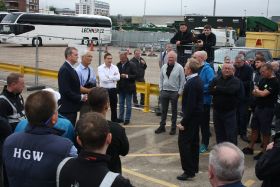 The Covent Garden Market Tenants’s Association (CGTA) has warned of “more protests on a larger scale” to demonstrate ongoing concerns over the redevelopment.

“The market was brought to a standstill by traders' vehicles in a matter of minutes, clearly demonstrating how quickly road congestion can occur on the market, and what will undoubtedly happen again when the current road plan is implemented in different areas of the market,” he wrote.

CGMA communications manager Alastair Owen said: “We are in no doubt about the strength of feeling by the CGTA but the focus needs to be on finding solutions.”

Owen said CEO Daniel Tomkinson has met with the CGTA to discuss specific concerns around the Entry Plaza and car parking.

“On the Monday, before the demonstration on the Tuesday, Pam and Daniel offered instead to sit down with Gary and members of the CGTA executive in a couple of weeks to review the situation,” he said. This would allow the CGMA team time to work up practical solutions to their issues. We have had no response to this offer.

“We are currently working on the issues and concerns raised. We hope to sit down with the CGTA executive in a couple of weeks to look at practical solutions, together.”

But Marshall wrote that some companies now face risk of failure due to an unworkable decant, and “the tenant community will no longer accept being treated with such total disregard by the Board of the CGMA.” “Unfortunately, as we are left with no other option, there may be further protests, on a far bigger scale, by the market community in the near future,” he said.

New board members for CGMA

Sara Turnbull and John Lelliott have joined the board of CGMA. Turnbull and Lelliott, who will chair the audit and risk committee, took up their appointments on 21 September for three and four year terms respectively.

The news follows the appointment of Sir Edward Lister to the board in June this year and the reappointments this year of Pam Alexander, Bill Edgerley, Archie Robertson, Teresa Wickham and Nigel Jenney.

Turnbull and Lelliott replace Helen Gordon and Glyn Smith, who are each standing down after nine years’ service.