The physalis-type fruit, complete with intact skin, proves that this type of plant dates back much further than previously thought 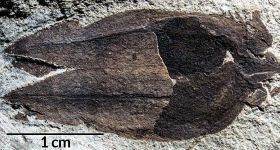 A 52 million-year-old fossilised fruit has been discovered in a rainforest in Patagonia.

The plant belongs to the Solanaceae – or nightshade – family which also includes potatoes, peppers and tomatoes. It most closely resembles a physalis, with a papery husk growing around a fleshy berry.

It was discovered by a team led by Peter Wilf, professor of geosciences at Pennsylvania State University, who described the discovery of this type of plant fossil as rare.

“It’s the only fossil fruit ever found of this whole group of plants, that now has over 2,000 species,” he told BBC News.

“Here we have this discovery of these incredibly rare, delicate fossils…it’s almost unheard of that such a thing could be fossilised.”

The discovery at the Laguna del Junco volcanic lake sheds new lights on this plant family, proving it goes back much further than previously thought, by tens of millions of years.

Wilf believes many more discoveries could be made in the same area.