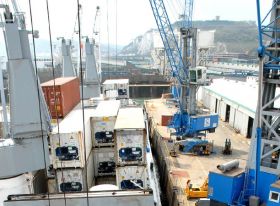 Cool Carriers will bring its Coolman Central America and West Indies service to Dover Cargo Terminal for onward distribution to UK and European markets from January 2018.

The company, which has invested heavily in boosting both the palletised and container capacities of its fleet, says its decision was prompted in part by the Port’s flagship Dover Western Docks Revival project which will create a new cargo terminal and logistics hub.

“We will move the UK discharge operation for our Coolman Service to Dover as of January 2018," said Michael Bergman, line manager at Cool Carriers. “There are various reasons behind our decision, such as Dover’s geographical location in relation to our clients’ distribution centres, as well as the massive infrastructure investment at the Port, and our requirements for the efficient handling of our new vessels which will enter service in early 2020.”

The move comes as Coolman celebrates 20 years as a preferred service provider for clients favouring a dedicated and exclusive operation which offers Controlled Atmosphere and shortest transit time to the UK, he added.

Cool Carriers will predominantly ship bananas and pineapples from Costa Rica, Colombia and the Dominican Republic to Port of Dover Cargo Ltd, which specialises in handling time sensitive perishable foods.

The new facilities, due to come on stream towards the end of next year, will include two new cargo berths (251m and up to 350m); a cargo terminal building with eight temperature controlled compartments, each capable of holding cargo between +1 and +14 degrees Celsius; and significant mobile harbour cranes capable of handling up to post panama size vessels.

Sam Stewart, General Manager at Port of Dover Cargo Ltd said: “Cool Carriers’ decision to come to Dover is excellent news. Port of Dover Cargo’s strength lies in its fast transport links to the wider UK and Continent. We’re just over 20 miles from mainland Europe and sit on one of the busiest international shipping lanes on Earth, providing minimum vessel deviation.

“Our new facilities and experienced operational staff will ensure the best possible handling of Cool Carriers’ cargo and we look forward to working alongside this outstanding industry leader," Stewart added.