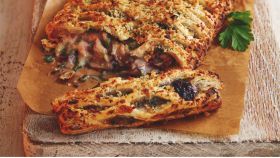 For the first time ever Tesco has two vegan Christmas dinner centerpieces: a turmeric spiced cauliflower wellington and a pecan and peanut roast with maple-roasted carrot and parsnip.

Other meat-free festive meal options now include a portobello mushroom wellington made with spinach and a festive nut roast with a mulled wine and cranberry glaze.

Tesco said demand for meat-free food has “soared” over the last year, prompting its expansion this Christmas. Thanks to initiatives like Meat Free Mondays and flexitarian diet, sales of chilled vegetarian ready meals and meat substitutes growing by 25 per cent, the retailer said.

It comes as Tesco joined other leading food businesses in pledging to help increase veg consumption at the recent Veg Summit.

Chef Derek Sarno, who has recently joined Tesco director of plant-based innovation, said: “These are changing times and vegetable dishes have now become centrepiece heroes in their own right on dinner tables up and down the country.”

Sarno’s focus is on putting plant-based food centre stage, and he is now working with suppliers, farmers and chefs on developing new products for sale over the coming year, Tesco said.

“We think that our Portobello Mushroom Wellington is so delicious that it may tempt diners to try something different this Christmas.

“This year, Tesco’s Christmas campaign celebrates the many ways we come together at Christmas, and with the quality of vegetarian and vegan food now so good there may even be squabbles across the dinner table over who gets what.”

Chief executive of the Vegetarian Society Lynne Elliot said: “With demand for vegetarian and meat-free alternatives rising, it’s great to see supermarkets across the UK like Tesco working hard to keep their customers happy and increasing their vegetarian range.”