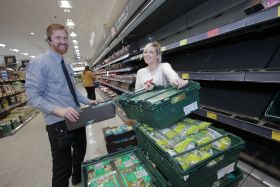 Aldi has donated almost 1,200 tonnes of surplus food since the start of 2015

Aldi UK & Ireland has pledged to halve its food waste by 2030, joining a host of other companies and organisations working towards the UN goal of slashing global food waste.

The supermarket has joined the ‘Friends of Champions 12.3’ network – a group of organisations working towards Target 12.3 of the Sustainable Development Goals: to cut per capita global food waste at the retail and consumer levels by 2030.

The network includes the EU food industry confederation FoodDrinkEurope and Pizza Hut among other members.

Under the plans, Aldi said it would work with food waste charity Wrap to engage further with its suppliers and third-party logistics providers, planning to further its donation programmes with redistribution charities FareShare and FoodCloud.

Progress will be measured through the retailer’s commitment to publicly report food waste and progress annually.

The commitment will also see Aldi helping customers to reduce waste in their homes, using initiatives such as Love Food Hate Waste messaging on products, in store and online.

Oliver King, managing director of corporate responsibility at Aldi, said: “Food waste is one of our sector’s most pressing issues, and reducing it is everyone’s responsibility.

“By joining this network we hope to work with others in the industry to tackle this collectively by sharing data and resources.”

Since the start of 2015, Aldi has donated almost 1,200 tonnes of surplus food (equivalent to over 2.8 million meals) to charities and community groups across the UK and Ireland.

Meanwhile, its suppliers have helped redistribute over 2,400 tonnes of surpluses (enough for around 5.75 million meals) since October 2015.

Dr Liz Goodwin from the World Resources Institute welcomed Aldi’s pledge, saying: “The challenge of tackling global food loss and waste is something we all need to work on and it’s good to see Aldi recognising the role they can play.”

She added: “We need more companies to set targets consistent with UN Sustainable Development Goal 12.3, to measure and report, and then take action to reduce food loss and waste.”