Wye Valley Produce donated sales from their early crop to charity, prompting their customers to do the same 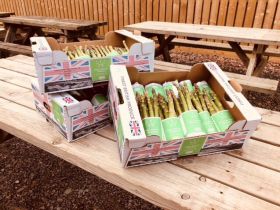 The first British asparagus of the season went on sale today with the proceeds going to charity.

Director, Chris Chinn, said they decided to give the proceeds of sale to St Michael’s Hospice, in Herefordshire, raising £2000 for the healthcare charity.

“We’re quite often the first to get asparagus out, we’re a bit behind this year, due to the 'beast from the east',” he said.

Chinn sold his crop onto wholesalers like Mash Purveryors, who added to the “charity chain” by selling the asparagus for another good cause.

Hannah Turner, marketing manager for Mash Purveyors said: “We made a donation to St Michael’s Hospice and we’re currently auctioning off three boxes for the Felix Project.

Chinn said the growing season for asparagus has been a “real battle” so far after trying conditions, including numerous icy snaps.

“We've had asparagus out for Valentine’s Day before and in January, but it’s fairly late this season, we were a bit worried about last night’s frost, there’s nothing more now until next week.

“It’s been a real battle, an expensive process fixing tunnels, the outside crop will be late, it wasn’t damaged, but it takes longer for soil temperature to warm up when it’s cold and wet.

“We’re about a week to ten days behind, but if it warms up then we could catch up.”