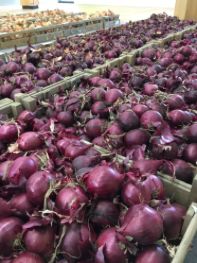 Onion varieties on display at a project open day

Growers could be achieving up to 30 tonnes per hectare more in yields of both set and drilled crops by selecting the best-performing varieties, new onion variety trials show.

Losses from waste in storage as a result of rot could also be reduced by up to 60 per cent in some varieties of brown and red onions in cold storage conditions, resulting in more efficient harvests. Onion bulb production was worth £126.4 million to the UK economy in 2016.

The trials, jointly funded by AHDB and seed companies, also identified that the variety Santero offers good resistance to downy mildew as well as good storage potential. Mildew-resistant varieties require less costly plant protection products and are regarded as a useful tool for sustainable crop protection as well as a valuable addition for organic growers.

Dawn Teverson, knowledge exchange manager at AHDB, said: “While yield data is important for growers when selecting varieties, other factors also need to be considered to increase productivity.

“These trials offer valuable objective data on maturity, so growers can stagger the harvest season; storage potential which can reduce waste and help to balance supply and demand; as well as disease resistance to help growers with long-term and sustainable integrated crop management.”

Sam Rix, technical director of PG Rix Farms, added: “We use the mildew results to inform decision making on variety suitability to fields that may be more prone to downy mildew infection. The early plant vigour data is also a useful guide to aid variety selection on potentially weedy sites.”

Bruce Napier, project lead from NIAB, said: “One of the primary objectives is to assess the storage potential of new varieties. There’s nothing more soul destroying than seeing all your efforts go to waste so it is vital that the harvest yield is maintained in store. A 40 per cent difference in storage performance would equate to the equivalent of 24t/ha extra lost in the poorest-performing varieties.”

Rix continued: “The storage data generated by the project is particularly important to assess dormancy levels and variety suitability for long-term storage. As an industry this is the only source of independent data we have regarding storage.”

Meanwhile results from several new cauliflower cultivars introduced in 2016-2017 trials also showed potential yield increases of 15 per cent compared to standard varieties. Every additional one per cent of Class 1 produce marketed can result in an increase in potential income of £95/ha, according to AHDB.