Injection of £45,000 will allow charity to double its fridge network, helping to redistribute surplus food and fight food waste 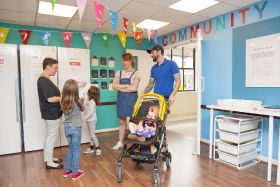 The fridges are mainly located in community centres

A charity that runs ‘community fridges’ across the UK has received £45,000 of funding from Morrisons to nearly double the size of its network.

An ambitious expansion plan will see environmental charity Hubbub grow from 31 community fridges to 58 by November, with money going towards setting up and monitoring the fridges and collecting food donations to stock them.

At present most of the fridges are located in Norfolk, London and southern England, but there are also locations in the north, Northern Ireland and Wales.

The 27 new fridges will be set up across the country, with the charity also expanding into Scotland, where five fridges are planned.

Hubbub chief executive Trewin Restorick said: “Every community should have a community fridge. It’s a wonderfully simple way to stop fresh food from going to waste and it’s fantastic to see organisations like the Morrisons Foundation supporting the Community Fridge Network.

“With more investment and support from big businesses, we can make sure so much more fresh food is enjoyed and not destroyed.”

The fridges – located mostly in community centres, as well as churches and family centres – are stocked with edible surplus food from local retailers, food businesses and households.

Sainsbury’s, Morrisons, Tesco (via FareShare) and M&S all donate regularly to community fridges in certain parts of the UK, and Total Produce, Booker, Riverford Organic, Lidl, Spar, Waitrose and the Co-op have all made donations in the past.

Open to anyone in the community to access, they are aimed at tackling food waste and food poverty in the UK, where £13 billion of edible food is thrown away from households each year and a further £3bn is wasted by the hospitality and food service sector, according to Wrap.

On average, each fridge is estimated to serve 137 people and redistribute 525kg of food a month. This means over 30 tonnes of food per month will be saved from waste by November.

Looking further forward, Hubbub’s Elle McAlle added: “The idea is for the fridge network to become an integral part of the national food redistribution system with fridges based at every local community centre.

“The fridges are not only about food sharing – people have also started to share other things, such as tools and recipes, at our locations, and people can be signposted to support services within the community. We really see them a starting point for all kinds of social support across the country”.

The Community Fridge Network was set up by Hubbub in July 2017, with funding from Esmée Fairbairn Foundation, North London Waste Authority, The Funding Network and Sainsbury’s. The fridges and freezers are donated by Bosch.