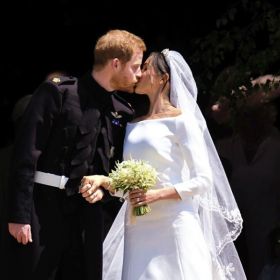 Morrisons was the big-four retailer of choice over royal wedding weekend after supermarkets made £415 million in 24 hours in the build up to the big day.

The supermarket notched up sales growth of 2.9 per cent, ahead of the overall market, according to Kantar Worldpanel data, as Prince Harry’s marriage to Meghan Markle in the sun saw the country’s grocery sales up 2.7 per cent on last year.

Aldi and Lidl remained the fastest growing retailers however, benefitting from the festivities to the tune of 6.7 and 10.4 per cent respectively, on last year. The pair combined now make up 12.7 per cent of the market.

Chris Hayward, consumer specialist at Kantar Worldpanel, said: “The sun shone on the grocery market over the past month with record-breaking temperatures, a bank holiday weekend and royal wedding fever all contributing to a bumper period. The Friday before the day of the wedding and the FA Cup Final experienced a particularly noticeable spike in sales, with grocers clocking in £415 million over the 24 hours."

He added: “Morrisons has been enjoying a successful run of form. The retailer has now celebrated 19 consecutive periods of sales growth and has held market share at 10.5 per cent. The supermarket succeeded in attracting an additional 311,000 new shoppers through its doors.”

Britain’s largest retailer Tesco experienced a sales increase of 2.2 per cent by adding an extra 170,000 customers to its stores, despite dropping market share by 0.1 percentage points to 27.7 per cent.

Sainsbury’s, which revealed an 18 per cent profit shortly after announcing its mega-merger with Asda, showed why it sought the deal after losing 0.2 points in market share.

Its first increase in promotional activity in three years did help boost sales by one per cent year-on-year however.

Iceland also dropped market share by 0.1 percentage points, though the retailer saw sales increase by 0.8 per cent while Ocado’s e-commerce platform rumbles on with a hefty year-on-year sales increase of 12.7 per cent.

Waitrose saw its market share fall back by 0.1 percentage points to 5.1 per cent, with the Co-op doing well off the purchase of 300,000 McColls stores, growing sales by 1.5 per cent.

Grocery inflation now stands at 2.1 per cent for the 12-week period ending 20 May 2018. Prices have been rising since the 12 weeks to 1 January 2017, following a period of grocery price deflation which ran for 30 consecutive periods from September 2014 to December 2016.