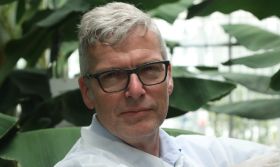 The global banana industry is failing to tackle the creeping menace posed by the fungus TR4, to the extent that the world’s most widely traded banana variety Cavendish has zero chance of survival, according to one of the leading authorities on the disease.

In an exclusive interview with Fruitnet's Mike Knowles and Michael Barker, respectively editors of Eurofruit and Fresh Produce Journal, Professor Gert Kema of Wageningen University & Research says that current efforts to save Cavendish, which is propagated by conventional vegetative reproduction rather than through sexual reproduction, have no real chance of success.

“The industry is losing,” he suggests. “[The industry] has neglected Panama disease (fusarium wilt) and black Sigatoka for years. They have not taken their responsibility to ensure sustainable production, rather they have contributed to the dissemination of the disease – particularly the bigger industries that can move and have facilitated the dissemination of the pathogen, including the introduction of TR4 in Africa.”

In the interview, Kema is particularly scathing of the major banana companies – with the notable exception of “courageous” US-based multinational Chiquita – who he accuses of failing to address the situation proactively and invest in R&D towards sustainability.

TR4, a strain of a fungus that causes fusarium wilt, known also as Panama disease, was first noted as long ago as the late 1960s, but following its recent spread from south-east Asia to other parts of the world including Africa and Australia, concern over the future survival of Cavendish is now at its highest.

“Active land claim/rent policies by banana entrepreneurs facilitate the dissemination,” Kema continues. “Until we found TR4 outside south-east Asia, the sector kept silent, but this woke them-up and since then many more incursions of TR4 were discovered by us and others. We are now at a point of no return to prepare for the worst and invest in sustainable solutions.”

Describing Cavendish as “a remnant of old-fashioned monoculture”, Kema suggests the industry’s future sustainability will lie in diversity.

“Deploy the richness of nature for the benefit of growers and consumers – that will make the sector lively and sustainable. Strategies to maintain Cavendish as the one and only banana are narrow-minded.”

This article was updated to make the correct distinction between TR4, the fungus, and the disease it causes in banana plants.

The full interview with Professor Gert Kema is published in the September 2018 issue of Eurofruit. To obtain your copy, contact Paul Poko via paul@fruitnet.com or by calling +442075010311