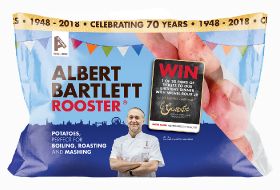 Potato supplier Albert Bartlett is celebrating its 70th anniversary with retro packaging on its 2kg bags of Rooster potatoes.

The vintage packaging, which will hit stores on 1 September, will promote a prize draw in collaboration with Albert Bartlett brand ambassador and Michelin-starred chef Michel Roux Jr at his famous London restaurant Le Gavroche.

The competition will offer 20 couples the chance to have a private exclusive dinner with Michel Roux Jr on Saturday 1 December, with the winning couples also being treated to a one-night stay at the four-star Washington Hotel in Mayfair, London.

In addition, the prize draw will be promoted on Albert Bartlett’s website and via social media, with winners being notified at the beginning of November.

Albert Bartlett & Sons was founded by Albert Bartlett in 1948 who, with the help of his sons Jimmy and Alex, initially boiled beetroot for sale at the local market in Airdrie.

Later, Bartlett expanded into pickling beetroot in the then famous ‘Grimbles Malt Vinegar’ and selling it under the ‘Scotty Brand’ to the local community for one shilling.

Some years down the line, in 1978, the company expanded into carrots, onions and potatoes, and since then it has focused on supplying various supermarket chains.

In 2007 the supplier began to specialise in potatoes, building the Albert Bartlett name as a consumer brand.

The firm remains entirely independent, with the fourth generation of the Bartlett family now working in the business.

Head of marketing Michael Jarvis said: “Albert Bartlett remains a family-run company and we are delighted with the manner in which it has grown from selling beetroot to the local market to being a leading supplier of fresh and frozen potatoes.

"As we now diversify into chilled potato products in our seventieth year, we look forward to continued success. We believe Albert would be very proud.”