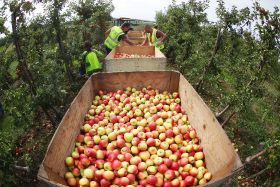 While the extreme weather conditions have caused shortages in many crops, in apples they have boosted early yields, with Asda’s growers enjoying a 12 per cent increase on this time last year.

The Beast from the East followed by a summer heatwave has helped the retailer’s growers to produce an early apple crop of over six million apples, with Asda saying it has worked closely with growers to ensure they made the most of the unusually warm weather.

Grower and supplier Richard Pemble claimed that the sweetness of his crop this year was “unrivalled by any since the turn of the century”.

The strong harvest follows a difficult season in 2017 when growers were hit by spring frosts, causing major crop losses. This year, by contrast, freezing temperatures and snow in the opening months of 2018 followed by a consistently hot summer has helped produce a bountiful harvest of apples, as well as a range of other fruits.

Asda apple technologist Mike Rudge commented: “Whilst the heatwave wreaked havoc on a number of fruit and veg, we worked closely with our apple growers to leverage the sizzling days to ensure we harvested our apples at the perfect moment, ensuring optimum ripeness and quality.

“Apples are an essential autumn staple in every home, so we’re glad the weather has been kinder to us this year, giving us the opportunity to work with growers to provide customers with apples for every occasion.”

Although the Beast from the East and Storm Emma caused major disruption to the fresh produce industry in February and March, particularly in field vegetables, the extreme conditions actually helped British apples by delaying blossoms, thus protecting them from frost when they did finally bloom.

This, coupled with consistently sunny days throughout the summer, has helped boost sugar levels in the fruit, improving apples’ flavour this year.

RHS chief horticulturalist Guy Barter told The Independent: “After a disappointing 2017, we’re extremely fortunate that this year everything has come together to produce an incredible bounty of pears, plums, apples, tomatoes, grapes, berries, olives and all sorts of other delicious edibles.”

Despite this, he said some fruits “may have suffered drought stress or caught sunburn, but those that haven’t will have soaked up the sun and be all the juicier and more tasty for it.”