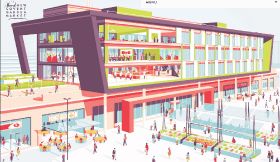 New Covent Garden Market has announced a strong increase in sales, with both its wholesalers and distributors increasing their total turnover by 11 per cent.

In the 12 months to 31 March 2018 the wholesale market’s total turnover grew six per cent to £626 million – an increase which the business development director Helen Evans put down to “the buoyancy of the independent foodservice sector”.

The market supplies 40 per cent of the fruit and vegetables eaten outside the home in London as well as all of the top 20 restaurants in the capital.

Evans said: “New Covent Garden Market plays a vital role in London’s hospitality and foodservice sectors. The current climate, especially in the foodservice sector, has seen some real volatility with some high-profile restaurant chain closures on the high street.

“Despite this, it was encouraging to see that both our wholesalers and distributors are seeing strong growth, with both sectors increasing turnover by about 11 per cent – a figure which is in part credit to the buoyancy of the independent foodservice sector.”

New Covent Garden Market is currently undergoing a £200m redevelopment to modernise the facilities used by the 167 companies based on site and the 2,500 people they employ.

The year to the end of March saw two key milestones in the redevelopment: the opening of both the new Flower Market and the Food exchange – a workspace, kitchen space and food culture venue, that small and medium-sized food businesses can operate from.

The project has not been without considerable controversy, however, with the market’s traders entering a legal battle with developers over what they say are impractical designs for the revamped site.