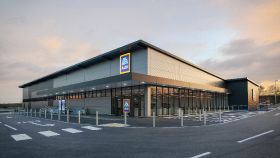 UK shoppers’ perceptions of discount retailers are coming in line with their opinions on other supermarkets as the discount channel grows and Aldi and Lidl look to expand further.

To coincide with the launch of Tesco’s new discount brand and stores, Jack’s, IGD compiled a list of eleven interesting stats about the UK’s discount channel. They are as follows:

2. Aldi is now a destination for the ‘main shop’, with 47 per cent of the retailer’s shoppers doing a main shop on their last trip. This is in line with non-discount supermarkets and has increased from 41 per cent over the same period a year ago.

4. IGD forecasts that the UK discount channel will account for £1 in every £7 spent on groceries by 2023.

7. The discount channel is well embedded in multichannel shopping behaviour, with 84 per cent of British grocery shoppers visiting at least one discounter a month.

8. Over half (53 per cent) of London grocery shoppers claim they would use Aldi and Lidl more if there was a store nearer to them.

9. Some 43 per cent of London shoppers would use variety discount stores, such as Poundland and B&M Bargains, more to buy groceries if there was one nearer to them.

Commenting on further growth opportunities in the discount channel, IGD director of insight Simon Wainwright said: “Ambitious store openings have supported rapid discount growth in the UK to date, however the next period of growth may be more complex.”

Wainright cited two main reasons: firstly, that competition for the best stores locations is intense, and secondly that cities and towns will see multiple stores from the same discounter, which risks self-cannibalisation of sales.

The IGD director predicted that discounters will work closer with developers to unlock contested sites, adding that maintaining sales growth will be a challenge, but he foresees “sizeable opportunities” for growth in London and the south east.

“The discount channel will continue to offer suppliers undeniable growth opportunities, so continuing consolidation and collaboration will offer greater scale, while new store openings will widen their reach,” he said.

“As competition within discount intensifies, differentiation will become more important for individual retailers to stand out. Exclusive products will help discounters to stand out from one another and make it harder for shoppers to compare prices across channels.

“A stronger and more impactful discount channel will depend on consolidation, centralisation and collaboration.”

With Tesco announcing that eight out of 10 products ranged at Jack's will be grown, reared or made in Britain, IGD also carried out research into the importance of provenance to British shoppers when buying food and groceries. The research charity found that:

2.    Nearly half (47 per cent) of UK grocery shoppers agree that it is more important to use British suppliers, even if that means food and groceries are more expensive for shoppers

3.    Some 78 per cent of shoppers agree that the UK needs to be more self-sufficient in food and not rely on imports as much.

4.    Over two thirds (68 per cent) of British grocery shoppers agree that supermarkets should focus more on selling food produced by British farmers.