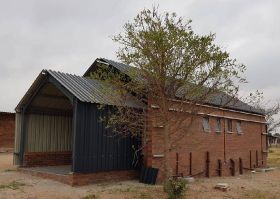 Facilities at the former tobacco farms are being renovated and upgraded

One of the world’s leading blueberry variety developers, OZblu, says it is seeing “significant transformation” in South Africa as far as the development of new and sustainable berry production.

According to the company, which was founded by renowned South African fruit breeding and licensing expert Roger Horak, two traditional tobacco farms in Limpopo are currently emerging as key production centres for the premium OZblu brand under the direction of Horak’s international group United Exports.

Inadequate, pre-existing accommodation is apparently making way for newly upgraded housing, for example, at Waterberg Berries, close to Vaalwater, where OZblu estate manager Carel van der Merwe and his team settled in just over a year ago.

“When I arrived here, there were no toilets for the farm workers, and most of the housing structures were in ruins,” Van der Merwe explains.

With the help of 12 newly appointed, permanent farm assistants, the farm’s original managers are busy renovating and upgrading the structures, even installing solar technology to support the staff and their families.

Traditional tobacco irrigation systems and kilns, meanwhile, have been replaced with new fertigation equipment and systems suited to blueberry production, which now extends to 50ha of planted area.

Pauer recently began planting blueberries on his farm in collaboration with OZblu, and currently has 27ha of the group’s varieties growing under shade netting.

That area is expected to expand further. “I can’t wait to get out of bed in the morning and into the fields,” says Pauer, who stopped producing tobacco eleven years ago because it was no longer feasible.

He had to sell a part of his farm, as well as equipment, and lay off workers in order to pay off debts following the closure of a major corporation based in nearby Potgietersrus. But after meeting Horak, he was convinced to direct his energy towards blueberries.

Metsi Berries now employs 45 people on a permanent basis. Together, Pauer and his team are overseeing similar work to upgrade accommodation facilities on the farm and thus provide for seasonal workers during harvest time.

Pauer believes the future is not just bright, but blue. “We are in our second year of blueberry production, and we are convinced that we will see our investment grow year on year.”