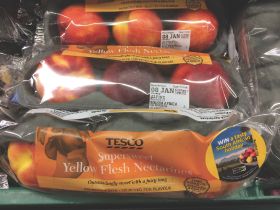 As the first hot summer days of the new season arrive in the Cape regions, stonefruit growers say they are looking forward to a normal crop this year compared with last year’s exports.

Hortgro says decent winter rains over the largest part of the Western Cape have brought much needed relief to many South African producers who have been battling with drought for the past few seasons.

There are still some parts of the Little Karoo (Barrydale to Ladismith regions) where the drought has not been broken yet. Despite this, most producers are confident that they will be able to have a normal season.

Hortgro says its crop projection model has proved its reliability over many seasons and the initial export crop estimate projects an increase in volumes compared to the previous season.

The total stonefruit export crop is estimated at 18.5m cartons compared with last year’s 17.3m cartons. This is still almost 1m cartons short of the 2016/17 crop.

Hortgro says the increase is due mainly to young orchards coming into production and expanding in recent years.

“Apricots are the only exception with current volumes estimated to be on par with 2017/18. This is due to the fact that parts of the Little Karoo region (Ladismith, Barrydale, Prins Albert and Calitzdorp), which is the main production region for fresh apricots, are experiencing issues with water availability and had cold weather during the flowering period."

This winter the Little Karoo regions reported a lack of rainfall and for growers it is likely to be a very tough season. In the Worcester and Robertson regions the water situation is much better than last year, while in the Berg River Valley, where growers have to share the water with urban users, are still seeing water restrictions in place.

Hortgro says early varieties in all production regions seem to have had good fruit set; mid- to late-season volumes are also estimated to increase.

Despite the situation in the Little Karoo, Hortgro says the general opinion is that the status of irrigation water is adequate to support a good crop for the season.

Historically it is difficult to produce accurate estimates so early in the season and the weather during the summer months, which is predicted to be dry and hot, could still have an effect.

Hortgo says the stonefruit industry is looking forward to the 2018/19 season and remains committed to supplying consumers with good quality and great tasting fruit. “Hortgro will regularly update crop estimates in order to keep all role players informed.”