US trade deal would see “huge decline” in food safety 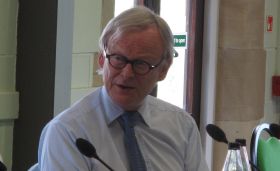 A free trade agreement with the US would put food safety at risk and damage public confidence, a former environment secretary has said.

Lord Deben, who headed up the Department of the Environment under John Major from 1993 to 1997, told The Guardian that if food imports are allowed at current US standards, there will be “a huge decline in food safety”.

Now chairman of the Committee on Climate Change, the politician said the US would insist that exports of its agricultural products are allowed in any free trade deal. “I know this – I’ve negotiated with them, for the whole of the EU…” he said. “You have four times as much food-borne disease in the US.”

The lord’s warning comes amid an ongoing debate over whether a post-Brexit trade agreement with the US could dilute food standards in Britain.

Current Defra secretary Michael Gove has repeatedly promised that the UK’s high food standards will be upheld in any deal, however many are concerned that trade secretary Liam Fox is more willing to compromise after suggesting last year that US products such as chlorinated chicken could be imported.

A government spokesman told The Guardian: “We have been absolutely clear that we will not water down our high food safety in the pursuit of any future trade agreements.

“As we leave the EU, we are committed to securing the best deal for the food, fishery and farming sectors.

“While it is vital that we explore new trading opportunities, these should not mean a dilution of the standards for which British food is world renowned.”