A group of farmers say they were not informed about a review into the AHDB statutory levy, saying they "cannot afford it" 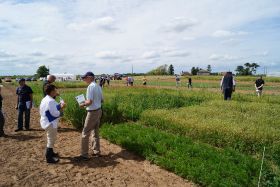 The AHDB is funded by a statutory levy on farmers, which funds agricultural reserach and innovation projects

Growers claiming the Agriculture & Horticulture Development Board is “not value for money” have created a petition calling for an end to the statutory levy.

A group of flower and vegetable producers have accused the AHDB of not adequately informing them about a recent review into the organisation and its levy structure, with the petition stating there was “a lack of knowledge and transparency about the review”.

The group behind the petition is aiming to get 65 signatures by December in a bid to trigger a vote within the AHDB on whether to maintain the statutory levy, or make it voluntary. The petition currently has 37 signatories.

One of the petition’s organisers told FPJ that if the levy became voluntary, most farmers would refuse to pay it, accusing the AHDB of wasteful spending, citing £700,000 spent on vehicle hire in their last accounts, filed in March this year.

The AHDB’s new board member & horticulture chair, Hayley Campbell-Gibbons responded to their claims, saying there had been a “healthy level of response” to the review, adding that the review’s end was not the “end of the conversation on the AHDB’s work”.

The AHDB raises around £60 million a year from statutory levies on growers, taking a percentage of their turnover each year to fund the organisation’s projects, which aim to develop and innovate British agriculture.

The review of the body’s work was launched at the end of August, finishing on November 9. Defra minister George Eustice said at the time: “This request for views is an opportunity for levy payers to have their say about the role and function of the various components of the AHDB in the future.”

But one grower behind the petition, who did not want to be named, said that most farmers they contacted were unaware the review was occurring. “There should have been a letter sent to farmers asking us for our views, with a space to fill in and send back to them,” he said.

In a letter to George Eustice, written by the group, they said the AHDB review also coincided with a difficult late season due to the poor spring and dry, hot summer, which prevented greater participation.

Their petition states: “The most obvious fact that came out of ringing around locally for the active group was that hardly any levy payers knew of the Levy Review. This applies across the wide range of businesses, from high-tech flower growers to large acreage vegetable and potato growers.”

The grower said he already has “massive support” for the petition, adding farmers “just can’t afford the levy”. “The fact is, with knowledge exchange we just don’t want it, if we have a good idea we keep it to ourselves.”

He continued: “At the end of the year we have to open up our cheque book. How can that be fair? We don’t need them, we are way ahead of where they are.”

Campbell-Gibbons said a voluntary levy “could focus the mind” of the AHDB but could also create “a short-term culture and mind-set in what is a long-term industry.”

“It’s no secret that there are a range of views on AHDB’s role and performance, and speaking to those who get involved with AHDB, it delivers enormous benefits. But, perception is reality, and AHDB perhaps can be bolder in communicating the benefits and spreading the word,” Campbell-Gibbons said.

“However, even in the few weeks I’ve been involved with the organisation, I can tell you there is no complacency… I firmly believe that its role in accelerating the development and adoption of new research and technology to give British horticulture a competitive edge is vital. More so now than ever before.”

She said AHDB Horticulture will be considering and acting over the responses to the review in the coming months.