Healthy snack brand develops four new products, making the most of various out-of-spec produce that would otherwise be wasted 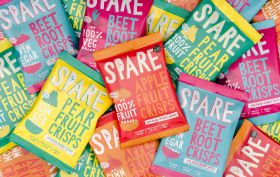 Wonky veg manufacturer Spare Snacks has rebranded and launched a new range of healthy air-dried vegetable crisps for sale at Co-op and Ocado.

In addition, the health snack manufacturer has added beetroot to its existing ‘Pure’ range, which also features apple and pear crisps.

Retailing at a recommended price of £1.25 per 22g bag, the snacks are created from out-of-spec and surplus produce that would otherwise go to waste.

Ben Whitehead, who founded Spare Snacks in 2016, said: “Since day one we’ve been all about using what we have, making the most of it and, of course, not wasting a thing. We’re on the side of the people. We’re helping farmers, consumers and the environment.

He added: “Our punchy new packaging is designed to be accessible to a broader audience, stand out on shelf and to be engaging to the full cross-section of healthy snackers. With our new look and a range to suit all tastes and ocassions, 2019 sees us grow from a small-scale social enterprise to growing mission-led business.”

As well as Ocado and Co Op, the crisps are now available from Selfridges, Sourced Market and Planet Organic, as well as café chain EAT and several delis, hotels and offices, including Google’s.

The brand also hopes to launch at other supermarkets, bars, hotels and on trains soon.