G’s to shake up import strategy in no-deal scenario 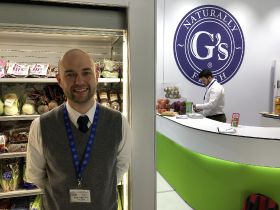 Speaking to FPJ at Fruit Logistica in Berlin, he said delays at border points were the company's main concern, and if the situation is “looking really bad”, date codes could be removed from packaging on G’s products, which include lettuce, celery, beetroot, radish and spring onion.

“If there’s a risk we’ll be delayed at border check points for four or five days, it’ll be very difficult for us to have date codes on our products,” he explained. “We’d have to just push the produce straight through.”

In order to avoid such delays, Gardiner confirmed that the supplier is exploring the possibility of importing produce via alternative trade routes from its key production and sourcing regions in Europe and Africa, for example Spain, Poland and Senegal.

At the moment, the majority of G’s fresh produce imports come through the Channel Tunnel, but this could change if Britain crashes out of Europe without a deal, and Dover becomes a major bottleneck as anticipated.

“We’re exploring a range of other routes and could potentially look at shipping stuff out of Holland or Spain, rather than France,” he added. “Some of our more durable products could possibly be put on a boat out of Spain. It’d take slightly longer, but it could make sense.”

A no-deal Brexit could also see the salad supplier transport more produce to a hub point in the UK, rather than sending it direct to retailers’ depots, so it can better manage the volume of produce it is able to import.

“At the moment we run a lot of directs from Spain straight into retailer depots, and it’s about working out what proportion of that we may need to bring into a hub point in the UK,” said Gardiner.

“This is how we operated four of five years ago anyway but it’s obviously not as efficient as going straight into retailer depots.”

Fortunately for G’s, the UK salad harvest starts earlier in the year than that of other vegetables, making the timing of a potential no-deal slightly less challenging.

“Where we have a benefit compared to some other producers is that we’ll hit the end of March and then we’ve only got four weeks before we start the bulk of our UK production, with the exception of celery which starts a bit later,” Gardiner explained.

“From the beginning of May, depending on what happens with the weather, we’ll be starting the UK salad harvest, which will reduce the volume we’re importing.

“Yes, we’ll have four difficult weeks if there’s no deal, but then we’re into the UK season and we have the summer to work out the situation a bit better before imports start again in the autumn.”

During the UK season, the vast majority of G’s salad vegetable supply is British, with some baby leaf imported from France and Italy and Polish product brought in on a contingency basis.

In the event of a no deal, Gardiner said imports of all of G’s products would likely be affected equally since they all pass through Europe en route to the UK.