UK to ‘remain open’ to EU seasonal workers after Brexit 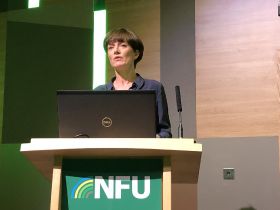 Seasonal workers from the EU will still be allowed to come and work in the UK in 2019 and 2020, even if there the UK leaves Europe without a deal, it has been confirmed.

The announcement from government, which was shared with growers at the NFU Conference in Birmingham today (20 February), was welcomed by the union’s horticulture and potatoes board chair, Ali Capper, who said it was nice to see some progress being made on the labour issue.

She stressed, however, that in a no-deal scenario, EU citizens arriving after 29 March will need to apply for European Temporary Leave to Remain to continue working in the UK for more than three months.

The application, which will incur a fee for the grower, will involve an ID check and a criminality check, and if accepted, the worker may be allowed to stay and work for up to three years.

Alternatively, if a with Brussels deal is reached before 29 March (or an extended Brexit deadline), there will be no change to current rules on freedom of movement for EU citizens during a two-year transition period.

In a no-deal scenario, Capper said she was unclear on whether workers will be allowed to leave the UK and re-enter either during the initial three-month period, or during a longer stay if they are granted leave to remain.

“We are asking the government detailed questions, but we haven’t got answers on them just yet,” she said. “All of this is quite important to understand… We’ve got to remember that we’re competing with Germany, the Netherlands, Italy for these workers and if it’s difficult, it’s another reason not to choose the UK, never mind what might happen to currency and all the rest of it.”

The NFU is calling on the Home Office to extend the initial three-month period to six to 12 months, with Capper saying she is “very worried” that it may otherwise prove a psychological barrier to European workers coming to the UK.

She also stressed that “clear, positive communications” on the arrangements with potential EU workers and the British horticulture sector are crucial.

“The UK will remain open for seasonal work after Brexit – that’s a really important message to get out into Eastern Europe. It’s absolutely critical because we’re recruiting right now,” she said.

While labour has been an issue for a number of years, shortages on UK fresh produce farms have generally intensified since the EU referendum in June 2016, largely due the devaluation of the pound, making the UK a less attractive destination for seasonal workers.

“In 2017 everything changed,” said Capper. “There were significant shortages in April and those shortages continued, peaking in September, which as an apple farmer wasn’t great for the sector.”

Although shortages in 2018 were actually similar to 2016 levels, there was a peak in August when the horticulture sector experienced a 30 per cent shortfall in labour.

Analysing data on labour shortages from recent years, the NFU has calculated that the fresh produce sector is currently somewhere between 8,000 and 10,000 workers short.

It is widely acknowledged that a pilot seasonal workers scheme, which will provide 2,500 non-EU workers for the sector in 2019 and 2020, is insufficient.

“Since last year when this was announced I’ve been asking for 2,500 to become 10,000,” said Capper. “Do I realistically think the government will do that this year? No. But I’d love to be surprised.

“If the government would like to give me that surprise any time this week or next week, that’d be fantastic.”