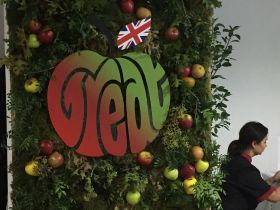 Topfruit industry body English Apples & Pears is using the age-old wisdom of ‘an apple a day’ to appeal to a new generation of British consumers and promote the fruit’s healthy snacking credentials.

Aiming for 60 per cent of all apples on shelf in UK supermarkets to be British by 2030, the industry body is encouraging consumers to swap from calorific snacks to apples in a bid to boost sales and help tackle Britain’s obesity crisis.

The 2019 EAP campaign started in the New Year with online activity but kicks off in earnest this week with new research revealing that the average adult racks up more than 1,400 calories a day in unhealthy snacking, outside of mealtimes.

“We were delighted that apples regained their top spot as the nation’s favourite fruit last year but the findings from our new consumer study are alarming and demonstrate an unhealthy reliance on processed, unhealthy snacks,” said Ali Capper, executive chair of the trade body.

“Experts warn that this is fuelling Britain’s obesity epidemic and, in turn, costing the NHS nearly £10 billion by 2050.

“We know that healthy eating is critically important, and that’s why this year we will be encouraging everyone to swap their unhealthy snacks and choose instead to eat an apple a day. Apples are the ultimate healthy on-the-go snack.”

The EAP study of 2,000 people reveals the average British adult is now binging on 10,000 calories a week outside of meals, with men consuming more than 1,700 calories a day on predominantly unhealthy food options and women racking up almost 1,200 snacking calories. This is the equivalent to 66 per cent and 58 per cent of their respective recommended daily calorie intakes.

EAP said its 2019 campaign will communicate that British apples are a healthier snacking option, providing soluble fibre which helps to keep you full for longer.

With the average snack containing 183 calories, EAP is encouraging consumers to swap to a British apple, at around 77 calories, thus reducing their calorie intake by up to 106 calories each time they snack.

The industry body calculated that swapping just one snack a day for a British apple could save the average person 3,120 calories a month.

Following a partnership with student-friendly online influencers, MOB Kitchen – who have been sharing ways to snack on apples via their social media accounts – EAP’s 2019 campaign will continue to promote apples’ health credentials throughout the year, with the launch of an apple health research review led by Tom Sanders, professor of nutrition at King’s College, London.

Promotional activity will peak in the autumn at the start of English apple season when the new crop arrives in store. Plans include a high-profile stunt, sampling, a parliamentary event and the publication of a white paper.

“We’re urging the industry to get involved and back our 2019 campaign,” said Capper. “With retailer support, we are confident we can persuade more people to choose apples as their healthy snack and ultimately improve the health of the nation.

“Our consumer research has shown that over half of British shoppers (53 per cent) buy British apples and with better, more visible displays in store 37 per cent of those shoppers would buy even more.”