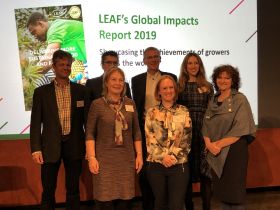 The speakers at this year's LEAF Marque Summit in London

Angus Davison of soft fruit producer Haygrove has called on environmental certification body LEAF to expand to growers in even more countries ahead of its chief executive’s visit to China next week.

Currently, the farm assurance system has almost 1,000 LEAF Marque certified businesses in 27 countries, growing 160 different crops – and there are 38 LEAF Demonstration Farms showing Integrated Farm Management in action – but Davison urged the food industry, with backing from retailers, to look even further afield.

“The UK will remain the size that it is with all its torsions and tensions, but agriculture, backed by some of the most progressive retailers, can shape LEAF into something that goes beyond 27 countries, beyond 1,000 businesses and impacts countries that are bound to have a bigger impact on more people than we can ever do,” he told the audience at LEAF Marque's annual summit in London.

Commenting on Drummond’s upcoming visit to growers and officials in China, the LEAF board member said: “You’re going to exactly the right place. Seed the ideas and get them to legislate – they’re quite good at that and they can move a vast nation very quickly.”

Davison has begun working in China in the past year or so, having announced in February 2018 that his company Haygrove was planting berries in China for the first time.

Beyond fruit production, the bulk of its operations in the country involve selling its polytunnels and substrate systems to Chinese soft fruit growers through its manufacturing arm Haygrove Growing Systems.

Presenting the LEAF’s global impacts report for 2018, Davison praised the organisation’s achievements since it was established 16 years ago, describing it as “a little gem” and urging the farming sector to “back it a lot more boldly”.

What food producers need to do to make a difference to the environment is simpler than it may seem, he told the audience, urging businesses to measure themselves differently and not simply “pursue a single bottom line”.

“I know I’m speaking to the converted,” he said, “but we also know it’s not happening.”

Stressing the importance of promoting and praising good environmental practice, he added: “There are nine measures in Integrated Farm Management and, Caroline, I think we should give a platform to those companies that wish LEAF Marque to publish their nine results.

“Imagine if the majority of agriculture did this. Imagine if all businesses did this. What better industry to lead in such a vital change than agriculture and food, which works at the coalface of nature and of climate change.”