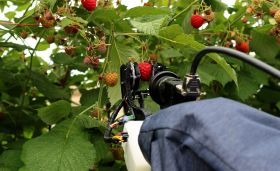 “Deep learning” robot raspberry pickers could be used on British farms in five years according to one scientist.

Dr Michael Stoelen, from the University of Plymouth, told an audience at AHDB SmartHort conference that his team had already have a prototype robotic arm which can pick a raspberry without damaging it in 12 seconds.

He added that once the robo-arm is commercialised they could halve that time, predicting their arrival in UK horticulture within five to ten years.

With labour making up between a third to half of the costs of berry production, growers could make big savings with robots, although Stoelen adds that they won’t make humans redundant just yet.

“These initial robots will not replace manual labour. What we expect is that they will be able to pick the more accessible fruit with human pickers there to pick the fruit which the machine isn’t yet able too,” Dr Stoelen said.

Dr Stoelen’s team has focused on human biology as the inspiration for their robots, developing an arm which mimics a human’s ability to shift between being robust and delicate when needs be.

“We looked at human muscles, such as the biceps and triceps, and the way humans can flex and stiffen those muscles depending on the situation. We’ve also been using ‘deep learning’ to build a large database of raspberries which will make it easier for the robot to classify and grade them.”

All the talks from the SmartHort 2019 conference can be viewed again on ahdb.org.uk/smarthort