Excess unsold stock of cabbage, carrots, parsnips and swedes given away free of charge in the days after Easter 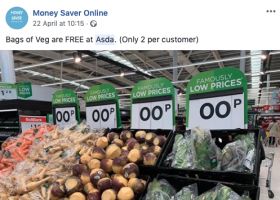 For the second time in just four months, the UK's second-largest food retailer Asda has had to deal with a significant volume of unsold fresh vegetables by giving them away for free.

At several of its roughly 630 stores across the country in the days immediately after Easter, the grocery chain was reportedly offering bags of cabbage, carrots, parsnips and swedes free of charge.

According to various reports, the giveaway was limited to two bags per customer and was in effect across much of the country – including stores in Birmingham, Essex, Manchester, Norfolk, Scotland, South Wales, Tyne & Wear and West Yorkshire.

"Help yourself," said a note on crates of veg at some of the stores. "We've got some leftovers that we don't want to go to waste so we're giving them away."

Reaction to the move was mixed although tending towards positive given the potential reduction in food waste. "Better PR to give it away than see any food waste," commented @Supermarketweet on Twitter. "This crop would’ve been programme grown based on historical sales from many years, so difficult to switch off at the last minute, even with a long range weather forecast."

Asda was forced to give bags of fresh vegetables away between Christmas 2018 and New Year 2019 as a result of being overstocked on certain key lines, despite those items being priced extremely low to compete with the discounters.