Farming incomes down 17 per cent

Spike in cost of energy, fertiliser and feed pushes up cost of production, causing a £929 million fall in overall agricultural income 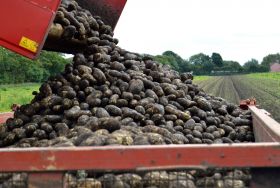 Income from farming fell sharply in 2018 due to a sharp increase in the cost of production, Defra has announced.

Total income from agriculture is estimated to have fallen by 17 per cent (£929 million) to £4,697m last year, with farming contributing £9,586m or (0.51 per cent) to the national economy in gross value added. This is a year-on-year decrease of six per cent.

The main drivers, according to Defra, were higher costs for producers, particularly in fuel, feed and fertilisers, and a decline in productivity – there was a 19 per cent drop in total income per annual work unit.

Despite this, crops’ overall output value rose by two per cent to £9,388m. The cold, wet spring followed by a dry, hot summer may have contributed to lower yields, but better prices helped offset falls in production.

It was a torrid year for potato producers, however, with sales decreasing by £220m to £641m. Both reduced planted area (down two per cent) and lower yields (down 15 per cent), affected by the summer drought, contributed to a 19 per cent fall in production.

Prices also fell by eight per cent, and a gradual recovery failed to offset the low prices at the start of the year.

Meanwhile, the total value of vegetables decreased by £38m to £1,417m, driven by lower volumes as a result of the challenging weather conditions.

Planting was delayed by cold, wet weather in the spring and the subsequent summer drought, and higher prices (up eight per cent) failed to offset a 9.9 per cent drop in production.

Fruit fared better and despite a late start to the season, the hot, dry weather resulted in an early harvest, with production slightly up on 2017 (+1.4 per cent). Overall, the value of fruit rose by £17m to £769m, with prices increasing by 0.8 per cent.

Farming incomes have generally followed an upward trajectory since 2000, however, incomes fell sharply in 2015 driven by lower commodity prices and a less favourable exchange rate.

In 2016 the exchange rate improved but a poor harvest and continued low commodity prices kept income low, while in 2017, incomes increased to the highest point in 20 years as a result of a favourable combination of a weaker pound, strong commodity prices and high levels of production.

However, the price of key inputs (particularly energy, fertilisers and feed) increased sharply last year, pushing up the costs of production, and driving the 17 per cent fall in total income from farming.