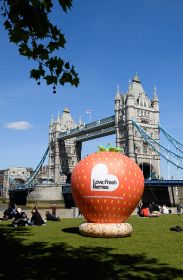 British strawberries are blowing up in more ways than one with a giant berry inflated outside Tower Bridge yesterday to mark the season’s start.

The most popular soft fruit, strawberry sales have continued to grow in the past year, achieving nine per cent value increase on this time in 2018, racking up £653 million sales.

In the past 12 months more than 131,000 tonnes of strawberries were sold in the UK, although faced competition from raspberries and blueberries, which grew in a value by 17 per cent and 14 per cent respectively in the past year.

The British strawberry season has begun earlier this year according to British Summer Fruits, after warmer winter and spring have helped to speed up strawberry flowering and ripening.

Aldi laid claim to stocking the first British strawberry this year, at the start of February, two months before the traditional start of the season in May, albeit grown in a glasshouse.

Nick Marston, chairman of British Summer Fruits, the industry body that represents 95 per cent of berries supplied to UK supermarkets, said: “Ongoing innovations in our industry including the introduction of great new varieties of berries delivering sweetness and flavour, and advanced growing techniques such as large-scale glasshouse production for season extension, has meant that we can now offer shoppers the freshest, highest-quality British berries for nine months of the year.”