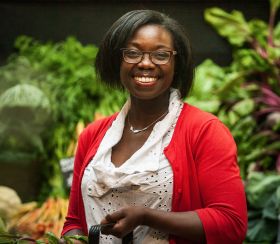 Nuffield scholar Barbara Bray has received an MBE for services to food nutrition.

The award, announced in the Queen's Birthday Honours this week, recognises Bray's work in examining the role of healthy eating and nutrition, having completed a Nuffield scholarship focued on vegetable production for specific nutritional needs.

Bray is currently a director of the Oxford Farming Conference and sits on committees for both the Institute of Food Science and Technology and The Nutrition Society’s Training Academy. She has also recently contributed to debates at the UN Committee for Food Security in Rome on Youth and Women in Agriculture, and will be speaking at FPJ Live in October.

“For anyone with a passion for food and farming, the ability to work with a range of people, sharing knowledge and ideas, is such an important skill,” Bray said. “I have found the agri-food sector a great space to work in as a black British scientist and to lead real positive change.

"I’m delighted to receive this award and look forward to many more years of educating people about food and nutrition, supporting women in their early careers in the agri-food sector and being a role model for the next generation of black British scientists.”

Another Nuffield scholar, John Martin, received an MBE for services to agriculture in Northern Ireland for his dedication to the development of young farmers and the Royal Ulster Agricultural Society, where he currently serves as chairman of the finance committee.