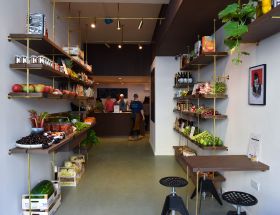 A 'revolutionary' new cafe concept has launched in London with the promise of featuring a fully traceable, seasonal food menu alongside a grocery offer.

Natoora Counter has launched on Elgin Crescent in Notting Hill, and goes beyond a grocery store format to offer breakfast, lunch, coffee and snacks from a daily changing menu described as "radically seasonal and entirely traceable".

Explaining the new format, which represents Natoora's fifth store but the first under the Counter name, the company said that rather than relying on processed ingredients sourced from different distributors, it instead sources everything from its menu through its own supply chain. "This traceable approach provides much-needed clarity to consumers and will also have a dramatic impact on improving the way food is being farmed and supplied," it added.

Explaining its 'radically seasonal' phraseology, Natoora said it works "beyond the four seasons" by looking more closely at nature and working with the seasons at a micro level. That's to say every day is treated as a new season, with the produce range constantly refreshed.

The company also said it wants to give consumers unparalleled traceability, whether it be explaining that its Sunsweet melon is from Oscar Zerbinati in Mantua, or quinoa grown by Andrew in Suffolk. Sourcing information will be made clear throughout the store.

Sustainability initiatives include every dish being made to order, all takeaway packaging being compostable and the range of fruit and veg all sold lose.

"Natoora Counter is completely revolutionary within the industry and yet was a very natural progression for us," said Natoora chief executive Franco Fubini. "Nobody else has dared to address the food system at this level, tackling so many facets simultaneously with such clarity of vision. We are determined to create a better future of food and this involves everyone, the consumer as well as the farmer."