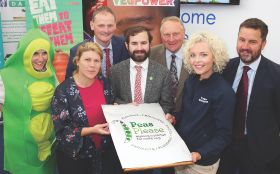 UK-wide initiative to increase vegetable consumption has received significant funding from the National Lottery Community Fund to deliver meaningful change in the food system by 2023 by making it easier for everyone, particularly those on low incomes, to eat more veg.

New support from the National Lottery Community Fund means that Peas Please is now on track to ensure that more than a billion additional portions of vegetables are eaten in the UK over the next four years.

Peas Please is the brainchild of the Food Foundation, and plans to create what it calls “a new generation of food system agents of change”, known as Veg Advocates, working at a national and community level. These citizen participants will play a key role in helping Peas Please to drive up supply of and demand for veg simultaneously by increasing the amount of veg on offer; increasing people’s veg purchasing power; and making veg more appealing.

The Food Foundation hasn’t revealed how much cash it has received from the National Lottery Community Fund, but described the sum as “sizeable” and enough to keep the project running for a further four years.

Peas Pleaseis coordinated by partner organisations in England, Northern Ireland, Scotland and Wales, and aims to bring together business and brands from across the food system to secure commitments to improve the availability, affordability and quality of the veg offered in supermarkets, shops, schools, pubs, fast food outlets and beyond.

In the two and a half years since the initiative was launched, it has secured 47 pledges of action from businesses operating along the supply chain and commitments from 21 city partnerships. The project has established its monitoring system and published its first Progress Report, which showed that 4.8 million additional portions have already been consumed as a result of Peas Please. The programme also initiated and incubated the Veg Powerfund, which has in turn launched a £10m veg advertising campaign, in partnership with ITV, aimed at school children.