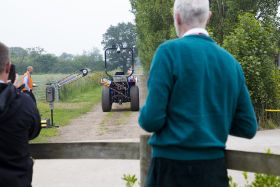 Attendees at the HFHa event saw the driverless tractor in action

Progress is being made in the development of self-driving tractors, as Harper Adams University explores technology to cut labour requirements and potentially make farming safer.

Despite concerns in the industry around the potential risks of using unmanned vehicles, agricultural technology experts involved in the Hands-Free Hectare Connected Autonomous Vehicles (HFHa CAV) project argue they have the potential to make the relatively unregulated use of HGVs in agriculture safer.

“Farmers are working extremely long and sometimes unsafe hours, and we predict that with the help of autonomous vehicles the not-uncommon 100-hour working week should become a thing of the past,” said Martin Abell of agricultural technology firm Precision Decisions.

The other, more obvious, benefit of driverless tractors to farmers is their potential to replace manual labour. A recent study by Harper Adams professor James Lowenberg-DeBoer showed that human supervision of robotic labour is required just 10 per cent of the time a driverless tractor is in the field, with the potential to make crop production more cost-effective and efficient.

“The study is the first rigorous economic analysis that supports the hypothesis that swarm robotics will dramatically alter the economic environment in which UK arable farms will operate,” he said.

“The model shows that autonomous farming with small-scale equipment, as used in the HFHa, has the potential break-even point at 100 hectares which is equivalent to 500 hectares with contemporary UK systems in wheat production, increasing the viability of small farms.”

The HFHa team at the university recently hosted an event to share the learnings from their connected autonomous vehicles (CAV) project to representatives and experts from the agricultural engineering industry.

At the event, participants were given a demonstration of the Iseki tractor driving from just outside the HFHa workshop to the group’s research field.

Senior agricultural engineering lecturer Kit Franklin said: “Previously, our tractor had a fail-safe system which was very risk adverse: if it identified an obstacle, it would just automatically stop and turn-off.

“Now, it slows down if an obstacle is four metres ahead and pauses if something is one metre from its wheels. It’s a step up from where we were, but we’d have liked to have gone further to avoid obstacles.”

The meeting was also a forum to discuss a good practice guide for the operation of autonomous vehicles in agriculture, with participants taking into account the potential impacts on society, farmers and the agricultural robotics industry.

The group concluded that perceptions of robotics in agriculture need to be challenged so that people recognise its benefits rather than simply viewing it as a threat.

Attendees imagined a code of practice for robotic operations would not have legal standing but would rather provide an industry approach that could inform and support lawmakers in due course.

The debate around responsibility was also highlighted as an issue that would need to be addressed. If a robot caused damage, who would be held responsible?

In addition, it was agreed that even if human beings are taken out of the field, they should still have ultimate control, receiving updates on the tractor’s operations via an app.