New variety pays off for blackcurrants 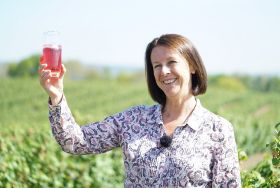 British blackcurrants are gearing up for a quality season with 10,000 tonnes forecast according to The Blackcurrant Foundation.

The season was described by one grower as “much better than predicted” with a new climate change-resistant blackcurrant variety set for its first harvest this year.

With the blackcurrant season now underway, investment in climate-resilient varieties and new growing techniques are set to produce a good harvest according to The Blackcurrant Foundation.

In partnership with NIAB EMR and The James Hutton Institute, The Blackcurrant Foundation has undertaken a project looking to establish innovative ways British growers can encourage blackcurrant bushes to flourish in warmer temperatures.

Harriet Prosser, a blackcurrant agronomist at Lucozade Ribena Suntory, said: "This is a long-term strategy, as it takes a minimum of 13 years to establish a new variety. However, with such a mature breeding programme, we have selections at all stages of development. This year we will see the first fruit harvested from our newest climate-resilient variety, Ben Lawers."

The Blackcurrant Foundation's spokesperson Jo Hilditch added: "Early reports are that the harvest is looking much better than predicted, which is great news for us as growers, and great news for Ribena, who use 90 per cent of Britain’s blackcurrant crop. We are proud to be able to supply our customers with 100% British fruit and work hard to ensure our blackcurrants maintain the same great quality and flavour every year."

Most of Britain’s blackcurrant crop goes towards Ribena production, but their increasingly recognised health benefits have led some to predictgreater fresh sales in the future.

At a recent British Summer Fruits event, food and health writer Dr Rupi Aujla said blackcurrants had one of the highest levels of anthocyanins, a compound linked to numerous health benefits.