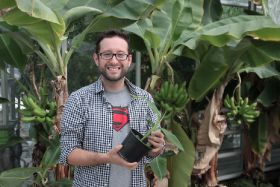 The scientist responsible for investigating the first official cases of Panama disease in the Latin America banana industry has been named publicly for the first time, as the industry awaits final confirmation of preliminary test results possibly as early as this week.

Fernando García-Bastidas, who is originally from Colombia but now lives and works in the Netherlands, has already performed initial tests on samples he took from two banana plantations in northern Colombia, where signs of the soil-borne fungus TR4 – responsible for causing Fusarium wilt or Panama disease in banana plants – were detected earlier this year.

According to a statement released by his employer KeyGene, which specialises in non-GM molecular breeding to develop better crops, García has been working with the Colombian Agricultural Institute (ICA) to analyse samples he took in person while on location in the region of La Guajira back in June.

A number of steps are required in order to diagnose Panama disease, and Fruitnet understands all of these are now being carried out in the Netherlands rather than in Colombia itself.

The final results are expected to be sent to ICA during the next month, potentially as early as this week.

Professor Gert Kema, a pre-eminent expert in plant phytopathology at Wageningen University & Research, is also understood to be collaborating with KeyGene to manage the diagnostics process.

"In June, Fernando García-Bastidas travelled to Colombia to support the ICA team working on farms for which infection with TR4 was feared," the statement said.

"García trained members of the diagnostic team in Colombia working with TR4 during the past years. That is why ICA requested García’s support when several Colombian banana farms were showing suspicious symptoms."

An ICA team supported by García took samples from the suspected fields and performed the first diagnostic tests in Colombia itself, KeyGene added.

"Based on the results of those screenings, which strengthened the suspicion, samples were sent to the Netherlands for further analysis.

"These advanced analysis are now being performed by KeyGene and Wageningen University & Research, coordinated by García. The team is sequencing the fungal DNA, performing pathogenicity tests and will perform some other additional tests if necessary."

García has spent several years studying the effects of Panama disease and the potential for plant breeding to uncover resistance to the fungus and its associated condition.

Earlier this year, he completed a PhD thesis entitled Panama Disease in Banana: Spreads, Screens and Genes, in which he concluded that both conventional and non-conventional methods of breeding would be required in order to find a way to overcome the disease.

The thesis itself was described in a special foreword by Dan Koeppel, author of Banana: The Fate of the Fruit that Changed the World, as "the best modern overview of the fruit's life history and battles against Panama Disease that I've so far seen".