As a no-deal Brexit draws closer, more British companies are turning their eyes to opportunities in Asia and taking part in major industry events such as the upcoming Asia Fruit Logistica and Asiafruit Congress 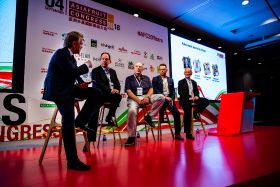 Asia Fruit Logistica 2019 takes place from 4-6 September at the AsiaWorld-Expo at Hong Kong International Airport, promising a unique opportunity to develop business in the ever-growing and bountiful Asian market.

The trade show is preceded on 3 September by major international conference the Asiafruit Congress, which offers trends, analysis and case studies from across Asia and is essential for international operators looking to break into the Far East market.

The programme for the 2019 congress includes sessions on Farming for the Future, Retail & Consumers and the Shifting Trade Landscape, while breakout sessions focus on subjects as diverse as intellectual property, brand localisation and new retail.

The Asia Fruit Logistica exhibition itself features a spotlight on produce marketing at the Business Forum, practical workshops on cold chain management at Cool Logistics Asia and a tech forum in the shape of SMART Horticulture Asia.

The event attracted more than 13,500 trade visitors last year, with visitor numbers up and floor space increasing by 10 per cent on the previous year’s show. Exhibitor numbers also rose to 826 companies from 46 countries, with every continent represented.

This year’s Asia Fruit Logistica will feature an expanded British pavilion – one of 27 nations to have its own dedicated space – reflecting increased interest in the Far East as exporters take on a more international perspective with Brexit looming.

Hosted by the Fresh Produce Journal, the stand features four co-exhibitors: productivity systems expert Marco, leading topfruit and stonefruit suppliers Richard Hochfeld and the Orchard Fruit Company, and vegetable grower Naylor Farms, who are themselves partnering with G’s to exhibit at the show. The CHA is also supporting the British presence at the show.

The event comes at an important time for British exporters, just weeks before the UK is due to depart the EU, and a no-deal departure looking increasingly likely. “There’s never been a more relevant time for British companies to be exploring new markets for their products and services,” says FPJ editor Michael Barker.

“The Asian market is very interesting for British exporters at the moment, which is reflected by the growing number of companies establishing ventures and partnerships and sending their produce to this part of the world.”