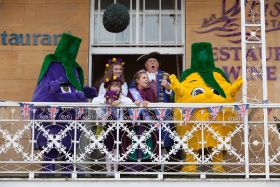 Organisers of this year's Pershore Plum Festival are promising the biggest-ever event.

The grand finale to August's month-long Plum Festival, which is now in its 23rd year, takes place over the upcoming bank holiday weekend. This year's highlights include the recreation of a 1929 cross-Channel stunt when a vintage motorcycle will power its way along the River Avon on wooden floats, accompanied by its 70-year-old Italian owner.

The festival attracts tens of thousands of visitors, with the Worcestershire market town becoming a sea of purple and yellow in homage to the plums which make the town famous - the Pershore Purple and the Pershore Yellow Egg plum. Shop windows are themed to these two colours, residents wear purple and yellow and you can find just about anything flavoured with plums, from sausages to soap, according to organisers.

Plum coach tours take place throughout the month, allowing people to visit the orchards as well as many of the restaurants and cafes that offer plum menus.

Festival mascots Eggbert and his girlfriend Prunella Plum, entertainers and musicians will be on hand to keep the crowds amused across all three days of the bank holiday weekend. Saturday sees the festival officially launched on National Plum Day, Sunday is Family Fun Day and Monday is the Plum Fayre itself.

Over 1,000 classic cars will be on show in the grounds of Pershore Abbey, there will be a Plum Fun Zone and many new family attractions.

Wychavon tourism officer and event organiser Angela Taylor said: "There's more than ever going on this year throughout the month and the bank holiday weekend will also look and feel different with lots of new ideas to make it even bigger and better than before."