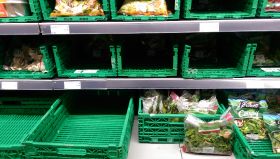 Co-op boss Steve Murrells has affirmed there could be shortages in fresh produce following a no-deal Brexit.

Supermarkets have long been sounding the alarm over fresh food imports being put at risk if Boris Johnson and his government opt for a no-deal Brexit.

Advocates for a no-deal were dealt a blow last week after a new bill intended to block a no-deal Brexit was backed by MPs.

Yet there are reports that Johnson’s government has drawn up “about 20 ways” to skirt any legislation preventing a no-deal Brexit, something which Murrells told The Guardian would hit fresh produce supply.

“We think there will be shortages in some fresh food areas. Where that is the case, we would endeavour to bring it in to give our customers a choice,” he said.

“The question for us is how much of the price increases can we absorb? How much can we spread that impact over a period of time?”

While Britain still grows around 60 per cent of its own vegetables, it is much less self-sufficient in fruit production, growing around 10 per cent of what it consumes in a year.

Murrells said he is most worried about fruit stock, suggesting the Co-op would resort to using more air freight to import fruit during the winter.

Murrells also suggested there were “very early signs” of shoppers stockpiling ahead of 31 October, when Britain is set to depart the EU.