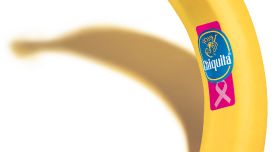 Around 200m Chiquita labels around the world will turn from blue to pink in October as the banana marketer renews its support for the American Cancer Society's National Breast Cancer Awareness Month.

The group is also taking part in the charity's Get Ben On Board challenge, an initiative set to add US$100 to every US$500 donation made online.

“Breast cancer is currently the most common cancer among women. As the world’s leading banana company, we recognise our responsibility to act as a 'good neighbour' and show our support.”

Meanwhile, the company is celebrating the 75th anniversary of Miss Chiquita herself by taking a look back at her many accomplishments throughout the years.

First introduced to US consumers in the early 1940s as a means of educating them on how to ripen, peel and enjoy bananas – since they were considered an exotic fruit at the time – the animated character's commercial jingle was at one point apparently played 376 times a day on radio stations throughout the US.

Miss Chiquita went on to star in television shows and movies, securing her status as a pop culture icon.

Years later in 1987, Chiquita’s leading lady received a makeover from renowned artist Oscar Grillo to take on the form of a vibrant Latin woman.

Although Miss Chiquita’s appearance has evolved over the years, the company itself insists her mission to demonstrate the fun side of healthy snacking has always remained the same.

“We’re so excited to celebrate 75 years with Miss Chiquita and the integral role that she has played for our fans and brand,” added Postell.

“As a society, we’ve watched how her character has evolved and played a vital role in the growth of the banana industry throughout the years.”