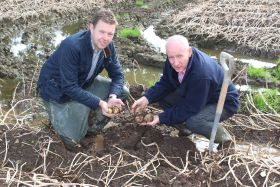 Growers say current conditions are “more akin to December” with further heavy rainfall at risk of making the 2019 harvest a “major challenge”.

A cold June in Northern Ireland put potatoes on the back foot from the beginning, with main-crop fields being sown out late this year.

“The recent rain and the promise of more to come with the threat of hurricane Lorenzo is making life very difficult for growers at the present time. We need a dry October across Europe, otherwise the 2019 potato harvest could quickly become a major challenge.”

“The likelihood is that the overall potato yields could be well down in Northern Ireland, year-on-year as wet or flooded areas may not be lifted. Meanwhile, the unfavourable weather conditions will have done little to improve crop quality,” Cunningham added.

Cunningham said it will take until the end of October before the market prospects for the potato sector can be accurately assessed.

“We are now operating within a European market. It will take at least another month before the size of this year’s harvest can be fully gauged. Brexit is another issue that we will have to factor in over the coming weeks.”

While a major category in UK fresh produce sales, potatoes have struggled to gain ground in recent years, with campaigns such as AHDB’s “More than a bit on the side” promotion designed to kick start the category.

According to Cunningham efforts to promote the veg are starting to make some headway. “The food retail sector is on the rise and the potato industry is benefitting accordingly especially with the rise in interest in vegan food.

“Our analysis indicates that consumers are continuing to buy smaller potato pack sizes. It is also very interesting to note that sales of other carbohydrate sources, including rice and pasta have remained static over the past year.

Cunningham also indicated that demand for part prepared potatoes, peeled, chips and mash etc had grown significantly over the past 12 months.

“This is an very helpful platform from which to build a campaign to promote the nutritional value of potatoes.”