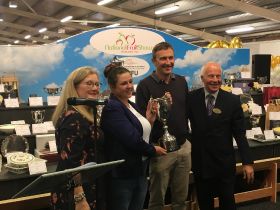 Topfruit grower JL Baxter and Son was the big winner of this year’s National Fruit Show, picking up 14 prizes for its apples and pears.

The Kent grower, headed by Clive Baxter, received the Fruiterer’s Company Medal for the Best Exhibit of Dessert Apples and the NFU South East prize for Best Exhibit of Apples or Pears in the Show, at an awards ceremony on the final day of the event.

Bardsley England also scooped nine prizes, including the John Acock Memorial Rosebowl for Exhibitor with Most Points in Culinary Classes, having won big on their Bramley varieties.

Top prize for the Tastiest Apple Competition was taken home by Clockhouse Farm’s Jazz variety, with Chandler & Dunn, and Simon Bray runners up for their Jazz apples.

Clockhouse Farm is a fourth generation family farm run by father and son duo Robert and Oliver Pascall. Originally a mixed farm growing hops, livestock and fruit which began in 1903, they are now farming approximately 330 hectares to the South of Coxheath in Kent. 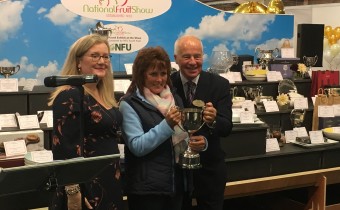 They first planted Jazz in 2006 on south facing slopes with deep cut fertile soil and have a precision irrigation system in place to deliver the right level of moisture and nutrients for the trees. This year was the first time the farm had put forward Jazz apples in to the competition at the National Fruit Show.

Gary Harrison, of Worldwide Fruit Ltd and the UK commercial manager for Jazz Apple, commented: “Winning the ‘UK’s Tastiest Apple’ prize again is fantastic news for the brand and kickstarts the UK Jazz Apple season in the best possible way but it couldn’t be achieved without the hard work of Robert, Oliver and their team who have produced some stunning apples over the summer.

“The long hours and attention to detail all our growers put in is extraordinary so accolades like this are essential to highlight their dedication and skill. On a brand level, winning the award five out of the last seven times shows how consistent in taste and flavour our apples are and reinforces our opinion that the love for Jazz Apple continues to grow amongst consumers.”

The award ceremony also marked the final National Fruit Show for president Michael Jack, who steps down following the event.

“I have thoroughly enjoyed being the show’s president and as I say my goodbyes to the many friends I have made during the last decade I know that the future of this wonderful industry and it’s national fruit show is in very good hands,” Jack said.

Jack added he will remember “the camaraderie and friendship over the last 10 years during which I have had the pleasure and honour of being your president”. 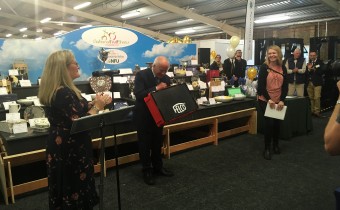