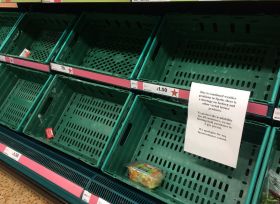 Over half of Brits are aware Brexit is likely to increase food prices, according to a new survey by shopping app Ubamarket.

The survey reveals concern among many UK shoppers regarding the prices and availability of products, with 59 per cent of UK adults (30 million) of the belief that Brexit will increase the price of food and produce in supermarkets. Meanwhile, 57 per cent (29.5m) believe Brexit will make European goods in supermarkets considerably more expensive.

The data is from a nationally representative sample of over 2,000 UK adults.

Supply of salad veg is likely to be particularly affected by potential hold-ups at the border due to the products’ short shelf life and the UK’s heavy reliance on producers in Murcia, Spain.

Around 90 per cent of the UK’s salad leaves from the middle of September through the winter are produced in the Spanish region, while the majority of other salad staples – such as peppers and cucumbers – also make a similar route through continental Europe, arriving at Dover.

Britain imports more than £400m of fresh tomatoes every year, many of them come from greenhouses in the Netherlands, which produces more tomatoes per square mile than any other country.

Given the UK’s reliance on Spain for citrus, there is also speculation that wholesalers will have to start looking to other markets, such as Cyprus, Turkey and Greece in a no-deal scenario.

In addition, there could supply disruption in frozen potato products, such as chips. These are the largest category of UK potato imports, with 99 per cent coming from the EU, particularly the Netherlands and Belgium.

These possibilities also have retailers worried, of course, with concerns that businesses might bulk buy from supermarkets which arguably have the most sophisticated supply models.

In the past, weather-related hold-ups and port blockades have resulted in many smaller traders buying from retailers where the last stocks can be found.

The latest survey of Britain’s retail industry, conducted by the CBI, shows that retailers are bracing for Brexit disruption and the peak Christmas period. Although retail sales figures this year have declined by 10 per cent, supermarkets have continued to stockpile in preparation for the new deadline.

Ubamarket chief executive Will Broome questioned the benefits of stockpiling, however, arguing that non-perishable goods which can be stockpiled are “unlikely to be affected”.

By contrast, fresh produce “may be in short supply in the short term immediately after the new Brexit deadline [likely to be 31 January],” he said.

“For retailers, there are obviously concerns from all sides, and as an industry, we need to ensure that customers are fully informed and aware of any potential delays and shortages,” he said.

“It is clear that there are supply chain concerns from the industry and retailers are working to try and alleviate any potential issues, however, they need greater assurances from politicians in both the UK and in Europe.

“I would urge all parties to come together to try and sort out a workable solution for everyone to ensure that food shortages are kept to a minimum across the winter period and as UK supply builds up as we approach summer 2020."

He added: “A no-deal Brexit, in and of itself, is not the issue with food at this moment in time, however the prolonged deadline and the uncertainty around a deal, tariffs, imports and exports and checks at borders may cause alarm for both retailers and customers.”