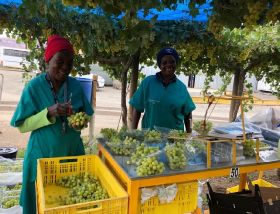 Namibian growers in the Aussenkehr region are expected to load their first containers in Cape Town this weekend.

In the north of South Africa growers started harvesting some two weeks ago, but first arrivals in Europe will only take place in week 47.

“For the past three weeks we have had cooler night temperatures which is boosting colour of the red and black varieties," he explained. "The day temperature is around 35 degrees and the variance in temperature will boost our increasing volumes of a range of new black and red Arra varieties which is coming on stream from this season."

Vermaak said that the new Arra range of white, red and black varieties would increasingly become key to the changing varietal mix in Namibia.

“We are on track to ship around 7m cartons this year," he continued. "Growers started packing in earnest yesterday and we expect the first fruit to be shipped from Cape Town this weekend. The grapes should be in the European and UK markets from the end of week 47 and beginning of week 48.”

Growers are confident that market conditions will be much better than last year.

“We know that there will be much less Californian grapes in the market this year at the start of the Southern Hemisphere season," Vermaak outlined. "This will encourage Peruvian exporters to ship their grapes early to the United States and our traditional markets, the UK and Europe, will receive less in the early season from South America.”

At present there is a shortage of white seedless grapes in the UK and Europe, Vermaak added.

In the north of South Africa, growers in the Loskop Valley region, which is South Africa’s earliest table grape region, have said the crop is not as early as previous expected.

“We are looking towards a 7.5m export crop,” said Gert Smit, SATI director for the region. “This will allow us to continue growing our volumes from this region and we should have our first grapes in Europe and the UK in week 47.”