Despite a largely successful harvest, there are still areas of the country where growers are unable to lift crops 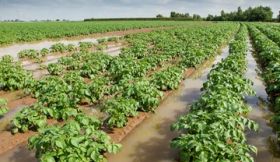 Stoic British potato farmers have defied the conditions to compete 89 per cent of the harvest during the wettest year since 2012.

That's according to the AHDB, which added that due to the success of the harvest and volume of stored crop, Christmas roast potatoes and crisps are expected to be safe.

However, the challenge for farmers still unable to lift crops due to wet or flooded ground will now be cash flow and the cost of labour while machinery lies idle, the levy body warned.

Head of arable market intelligence, David Eudall, said: “Farmers have worked through challenging conditions to harvest the majority of potatoes planted this year, which is a testament to their resilience.

“However, for those who couldn’t lift earlier in the year the saturated or flooded ground is affecting their ability to access the crop. Particularly in the north west of the country, Yorkshire and Lincolnshire.

Current data shows that 2-3 per cent of the crop is now unlikely to be lifted due to saturated soils degrading quality.

“This figure could rise as we head into December if weather conditions don’t improve," Eudall added. "For the remainder of potatoes in the ground, it will remain a question of whether quality will hold up for lifting in the New Year. Financially, it will be a challenging period for those who were unable to lift crop during the drier weather and growers will be monitoring drainage and the depth of winter frosts carefully, as these will affect what’s salvageable.”

Historically 2012 was the last wettest year, when 375mm of rain fell in the UK, but not as wet as 2000 when a total of 498mm hit the country, according to data from AHDB’s weather hub.