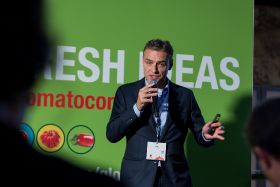 Dutch greenhouse specialist FoodVentures is expanding into China after enjoying success across its international operations.

Managing partner Eric van der Meer told an audience at the Global Tomato Congress in Rotterdam that it was also expanding its Kazakhstan greenhouse operations from five to 20 hectares over the next two years, alongside a new greenhouse lined up for China.

The novel business model of FoodVentures sees the company build greenhouses in less developed parts of the world, providing premium fresh produce to growing middle classes in those regions.

“The idea is to go close to the market, to the cities where people are starting to eat more fresh produce from an organised supply chain, with modern retail and cold-chain supply,” Van der Meer said.

“We use best-in-class technology, in practise Dutch greenhouses, and supply chains which are second to none, using Dutch people, or from other countries such Israel, Turkey or Spain, where they have the relevant experience.”

Van der Meer said he hasn’t come across a greenhouse with a lower unit cost than FoodVentures' operation in Kazakhstan, due to the combination of high yields with very low energy costs.

Despite the growth potential of the markets in those regions, Van der Meer, whose background is in oil and gas, said the company faced greater risk as a result of its unorthodox locations, describing a constant battle with corruption.

FoodVentures’ first operation in Ukraine was affected by the civil war in 2014, with another greenhouse built in Georgia, growing tomatoes and lettuce.

“You never know what the customs authorities or the people who give permits are thinking. There’s small-scale and large-scale corruption that can hit you at any time.

“It’s like a monster you can never kill, you can only keep it at bay and it can always come back. You can never win.”

Van der Meer outlined recent aims to upscale the business in Kazakhstan, where it exports tomatoes to Russia.

“We developed the market in Kazakhstan where we now have five hectares in operations right next to the Russian border exporting mainly to Russia. The cities there are relatively large and relatively wealthy and very far away from the supply chain that traditionally comes from The West and Turkey.

“We’re doubling the size there and next May we’ll have ten hectares, which is significant for a country where things don’t go smoothly.”

He said the company was able to take advantage of the energy abundance in the region, where much of the unused gas is wasted by “flaring off”.

“We have a negative CO2 print. The CO2 that would have been released by flaring it as waste is now partially converted into tomatoes. To certain investors and consumers this is highly attractive.”

Despite the challenges FoodVentures face, Van der Meer said the reward is great if the producers are committed to operating in tough conditions, as well getting the backing of local communities.

The feedback is very positive – this is what everybody wants, high-quality food, employment, new technology, and foreign investment. We hit all the good marks," he said.

“The difficulties are what make you stand out. This is not a normal environment but you create a better world starting with five hectares of tomatoes and if you like it you will tackle the difficulties and build a business that is better than your competitors.”