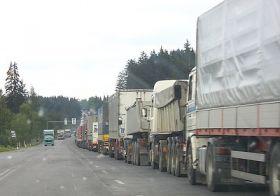 On the eve of the general election in the UK, the latest polls show the Conservatives’ lead over Labour has been cut significantly in recent days. This is partly a result of various leaks that have revealed multiple discrepancies between what the government has stated in public over Brexit and what it has privately discussed, including in official trade negotiations.

Leaked documents from meetings between UK and US officials over a post-Brexit trade deal raised fears last month about the UK government’s intentions to diverge from EU food standards, jeopardising UK farmers’ access to their main market.

In the documents, US trade representatives expressed disappointment at then-prime minister Theresa May’s plan to remain close to EU rules on food safety and animal health, describing this as a “worst-case scenario” for a UK-US trade deal.

Unlike the earlier agreement, prime minister Boris Johnson’s deal omits any reference to a “common rulebook”.

In November 2017, according to the documents, one US official recommended that the UK maintain “regulatory autonomy” from the EU, and asked if the UK would be open to bringing back chemical washes post-Brexit.

At the same meeting, the US raised concerns about food labelling, expressing concern that “labelling food with high sugar content (as has been done with tobacco) is not particularly useful in changing consumer behaviour”.

Food labelling forms a key plank of the UK's current public health strategy, including raising awareness of food labels through campaigns such as Change4Life in England and Wales and Eat Better Feel Better in Scotland.

The most recent Brexit-related leak came just this week, with the release of a government document detailing concerns about potential goods checks between Northern Ireland and Britain after Brexit.

Despite Johnson’s denials, trade from Great Britain to Northern Ireland would indeed require customs checks, as well as safety checks, particularly for food and animal products.

The paper from the Department for Exiting the EU lists preparing for "high levels" of checks as one of the challenges in delivering the government's Brexit deal, warning of "security, social and economic impacts" of such checks and controls.

According to the BBC, the document appears to caution that there is insufficient time to put in place the operational systems needed to implement the renegotiated Northern Ireland elements of the Brexit Withdrawal Agreement by December 2020.

Such a scenario would risk putting the UK straight back into preparations for a No-Deal Brexit, the risks of which an earlier government document, marked “official-sensitive”, has already laid out, including shortages of fuel, food and medicine, major disruptions to ports and a hard border between Ireland and Northern Ireland.