Marketing its first commercial crop this season, Kissabel wants to turn red-fleshed apples into a category of their own 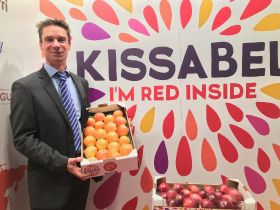 Interest in red-fleshed apples among growers and marketers has been growing for some time. As  one of the most prominent players in the sub-category, Ifored has spent the past seven years working with partners in various different countries to develop production of varieties known collectively as Kissabel. Now, with the marketing of its first commercial crop underway, we speak to project manager Emmanuel de Lapparent about the path ahead.