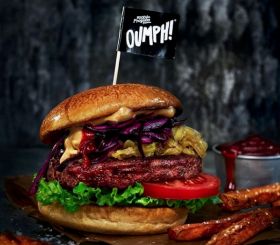 The Oumph! Burger has been named Best Vegan Burger at the 2020 Vegan Food & Living Product Awards.

Up against plant-based creations from the likes of Linda McCartney, Fry's and Quorn, the Swedish brand’s burger was praised for its texture, flavour and close resemblance to a meat-based burger.

“This really tastes like a burger, with the crust and centre being pretty bang on,” the jury said. “It has a very enjoyable taste and texture. This is a great one for anyone doing Veganuary in particular as it proves that vegans don’t have to miss out.”

Nick Jacobs, the brand’s head of sales for the UK and Ireland, said: "We’re delighted to have won vegan burger of the year and that it is testament to the incredible success the Oumph! Burger has achieved nationwide both in the retail sector but also within leading UK restaurants."

It has been created to resemble a juicy rare burger but like all of the brand’s products, it is made entirely with plant-based ingredients, including soya protein and beetroot extract.

The Oumph! Burger, which is gluten and dairy-free, weighs 113g, equivalent of a Quarter Pounder.

The meat substitute brand, which launched in Sweden and other Scandinavian markets in 2015, also claims to have a low climate impact and deliver nutritional benefits through products that are high in protein and fibre and a source of iron and folic acid.